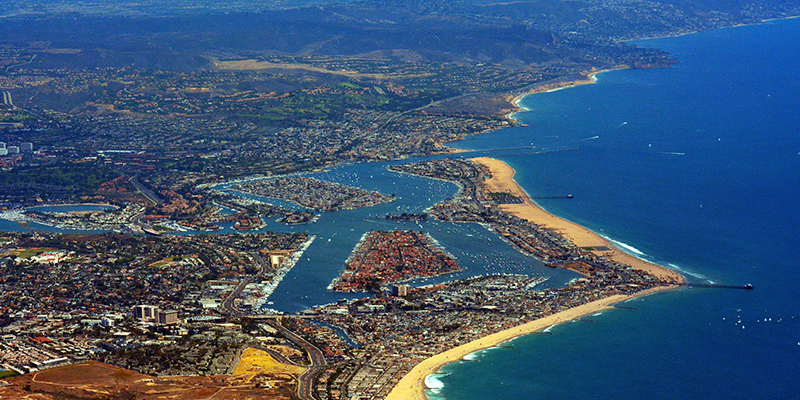 Orange County is a county located in the Los Angeles metropolitan area in the U.S. state of California. As of the 2010 census, the population was 3,010,232, making it the third-most populous county in California, the sixth most populous in the U.S., and more populous than 21 U.S. states. Although mostly suburban, it is the second most densely populated county in the state, behind San Francisco County. The county's four most populous cities, Anaheim, Santa Ana (the county seat), Irvine, and Huntington Beach, each have a population exceeding 200,000. Six cities are on the Pacific coast, including Seal Beach, Huntington Beach, Newport Beach, Laguna Beach, Dana Point, and San Clemente.
Orange County is included in the Los Angeles-Long Beach-Anaheim Metropolitan Statistical Area. The county has 34 incorporated cities. Older cities like Santa Ana, Anaheim, and Fullerton have traditional downtowns dating back to the 19th century, while newer commercial development or 'edge cities' stretch along I-5 between Disneyland and Santa Ana and between South Coast Plaza and the Irvine Business Complex, and cluster at Irvine Spectrum. Although single-family homes make up the dominant landscape for most of the county, Northern and Central Orange County is relatively more urbanized and dense as compared to those areas beyond Irvine, which are less dense, though still contiguous and primarily suburban, but not exurban.
The county is a tourist center, with attractions like Disneyland, Knott's Berry Farm, Mission San Juan Capistrano, Modjeska House, Yost Theater, Balboa Island, Angel Stadium, Honda Center, and several popular beaches along its more than 40 miles

Macro Mechanical Inc. is a licensed commercial refrigeration and air conditioning contractor located in Murrieta, California, just north of the San Diego border, in southwest Riverside county. Because of our centralized location, this gives us the ability to easily service Orange County, CA, as well as Riverside County , San Diego County , and San Bernardino County. Macro Mechanical Inc. specializes in Commercial Refrigeration and Air Conditioning with an emphasis on large scale refrigeration.